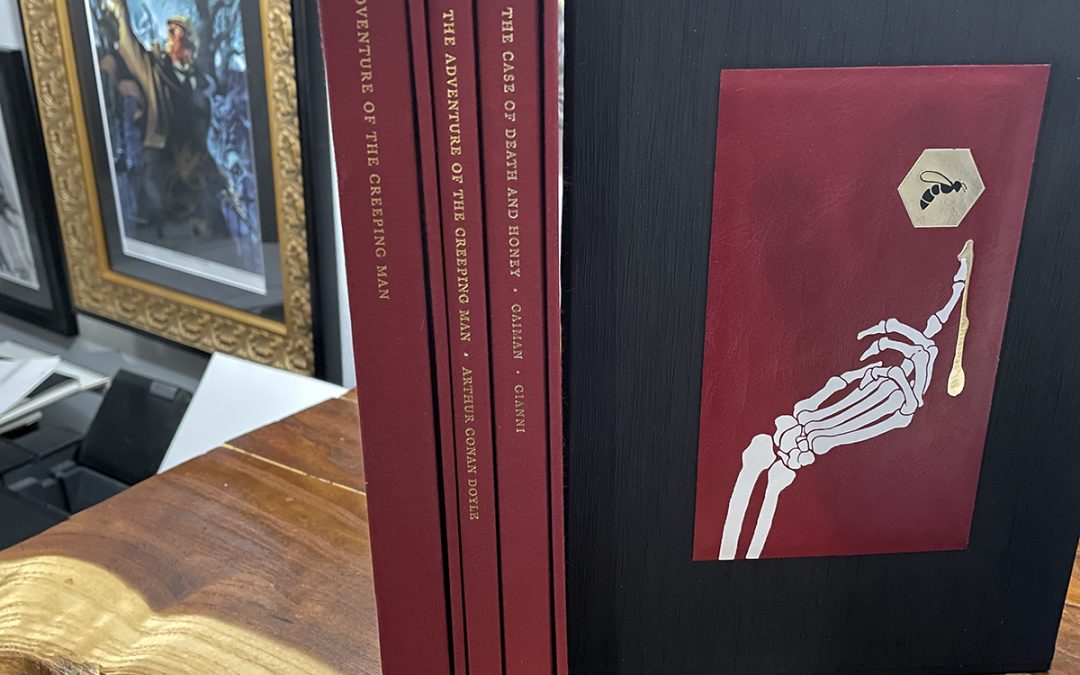 The Case of Death and Honey by Neil Gaiman A+ Areté Editions deliver the seminal follow-up to Sir Arthur Conan Doyle’s last Sherlock Holmes tale, “The Adventure of the Creeping Man,” and both the Neil Gaiman novella and the letterpress treatment of the stories by Areté are pure gold!

The Case of Death and Honey: The Numbered Edition by Areté may be the finest, most awe-inspiring book I own. As a huge fan of Gaiman and a Sherlock Holmes fanatic, I sensed the special editions of both the story that Doyle wrote to inspire Death and Honey, as well as the The Case of Death and Honey book itself would be truly special.

The tale woven by Neil Gaiman is one of emotion and legend, and it is written in the Victorian Holmes period and then the early 20th century, and though his style is his own, it greatly emulates the feeling that Doyle wrote this himself.

And having the world’s premier bookbinder Rich Tong, of Ludlow, the true pioneer and great artist in the field, produce the white goatskin binding full of gold to adorn the gilding bands and the intricate artwork of bees and magnifying glass and golden honey, of course, made this such an incredible, stand-out production. But it is what is within the book that matters (more on the fine press treatment later), and The Case of Death and Honey is a mysterious treasure of Sherlock Holmes stories.

The following book review of The Case of Death and Honey will have mild Spoilers* starting now:

In a tragic, yet predictable – and realistic – future for Mycroft Holmes, the famous detective’s brother, who was essentially the backbone of the British government, calls Sherlock to him as the morbidly obese Mycroft lies on his deathbed in his early middle years.

He speaks to life, living it, and charges Sherlock with a final problem to outshine all the rest in his career: find the fabled and oft searched means to ward off death with not a metaphorical fountain of youth, but a real solution to the problem.

The very foundation of this comes from Doyle’s “The Adventure of the Creeping Man” that Gaiman takes us to with a direct letter to Watson instructing his friend to change his account to make the creeping man who had been onto some form of youth concoction able to literally scale walls as though he had taken on a monkey-like form. By making the original story more far-fetched it would dissuade others from keying in on the aspect of eternal youth.

Sherlock Holmes endeavors to beekeeping for years and then searches until as an old man he finds a rare bee and an extraordinary beekeeper.

The characters in the story are mainly Holmes and Old Gao and his angry bees of the misty hills. They are all extraordinary in their own ways.

The writing of Sherlockian prose could not be better suited for this tale of intrigue.

Gaiman’s The Case of Death and Honey could be the best farewell the detective for hire will ever receive in fiction.

And so onto a review of both the Numbered Edition and the Fine Edition of The Case of Death and Honey crafted by Areté Editions.

First the more affordable fine editions, signed by the artist only, are a soft red cloth and adorned with gold on the cover in a great frontispiece of art by the illustrator of the books, Gary Gianni. Gianni crafted more than 40 pieces of art for the book and they are done in the traditional black and white style, like Sidney Paget that Holmes’ tales were originally published with in The Strand, and these were made into plates to stamp the pages with the images. They look so so good!

The paper is thick and two-color letterpress – red and black – is used throughout (by Hand & Eye Editions).

And bees and leaves adorn the pages as letterpress accents randomly throughout the text making for one heck of a premier printing production.

The silky cloth helps make this book of the finest quality and it matches an edition of “The Adventure of the Creeping Man” that was made to accompany the story it inspired, and it is also beautifully illustrated. For the Numbered books, the pages have gold on top of the page block, and gilded edges on the sides and the entire production just floors me. In an oversized volume with a faux-wooden slipcase that has leather and a skeleton with dripping honey on the front, the raised bands on the spine, many of them, are all surrounded by real gold.

The leather goatskin binding is truly the nicest I have ever handled.

There is a tipped-in colored piece of art of Holmes and Mycroft discussing life by Gary Gianni that is remarkable and poignant and reading the story in such a manner is one of the most pleasurable experiences one can have. They also produced an Artist Edition that I was not able to review but it looks awesome and included embedded original art in each cover. WOW and A+ are too weak to describe the magnitude of the grandiose fine press treatment for this project.

“The Case of Death and Honey by Neil Gaiman A+ Areté Editions” was written by R.J. Huneke.