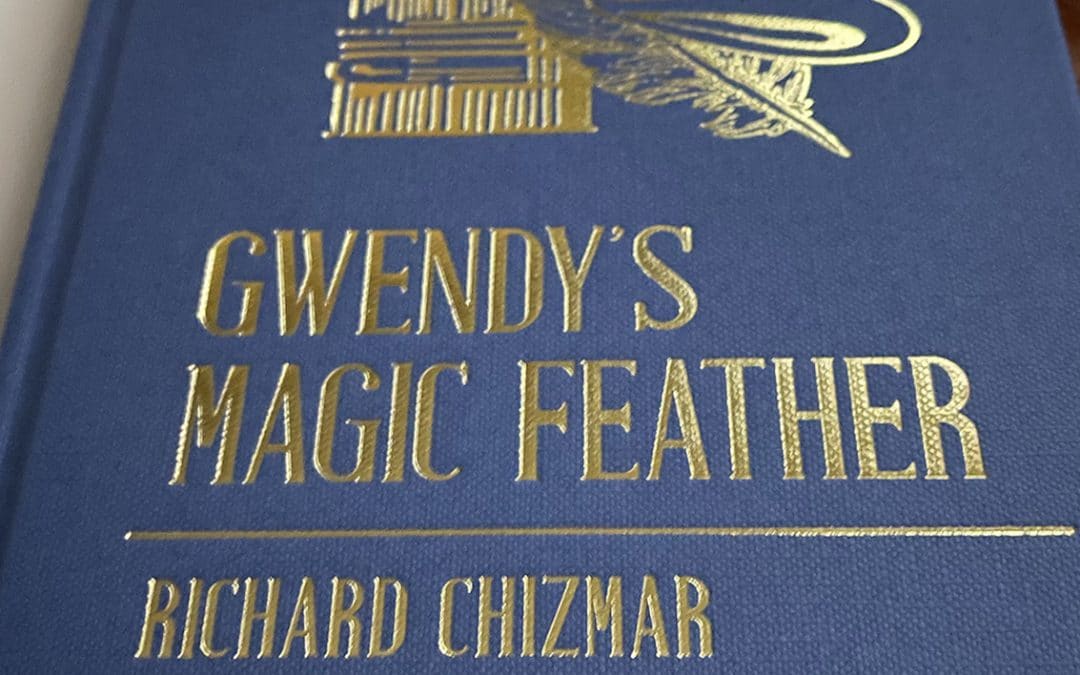 Richard Chizmar’s Gwendy’s Magic Feather forwards an odyssey undertaken by Gwendy who was just twelve when she was made caretaker of a device that impacted her world and ours: it was the rewarding, dangerous and beguiling Button Box.

Gwendy’s Magic Feather is the second book in the Gwendy Series. 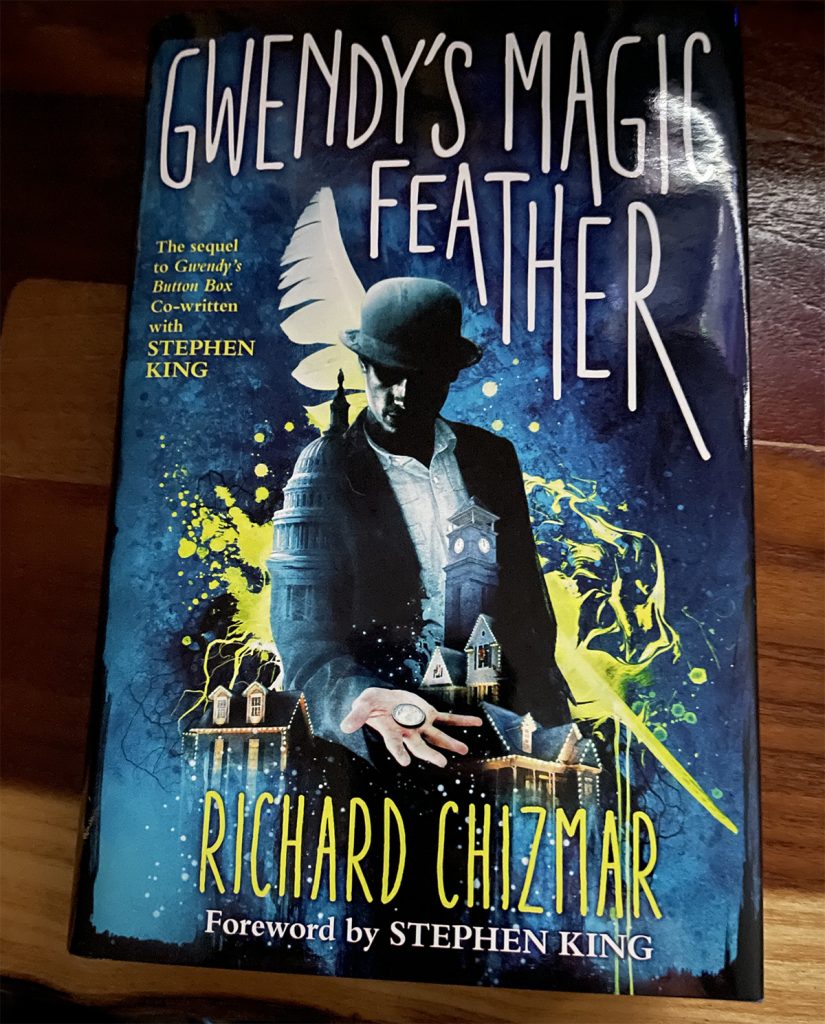 Gwendy’s Magic Feather surprises and chills, like a Maine snowdrift.

There is a great crime element in this book, a touch of macabre in both well-lit scenes and ones in the frozen darkness, and a lot of brooding suspense led by the intrinsic character of Gwendy.

The first book in the series is Gwendy’s Button Box, co-authored by Stephen King and Richard Chizmar, and if you have NOT read Gwendy’s Button Box, STOP HERE and go read that novella now! Not later. I do not care what format, reading is reading with it be via hologram, audiobook, or good old-fashioned paper, made from trees, that smells nice.

Here is a SPOILER WARNING** for the Preceding Book, Gwendy’s Button Box.

If you have read Gwendy’s Button Box, but it was not one of your favorite books, or it did not really move you, I highly recommend a second read if you like the character of Gwendy.

The second book in the series Gwendy’s Magic Feather brings new wonders and dangers to Gwendy, now 37, whose world is a whirlwind when the Button Box returns.

There are disturbing disappearances going on in Castle Rock, and melee in the world at large, and the character of Gwendy feels ever more intensely as she attempts to ward off the temptation of the Button Box.

The suspense simmers to a boil through her keen eyes.

Let us go back Back to Gwendy’s Button Box for a minute, as it is vital to understanding the 37-year-old Gwendy that appears in Chizmar’s novel.

Gwendy speaks with a stranger, a man with a felt hat, at age 12 who asks her to guard a precious object.

Put particular emphasis on these things: Gwendy lured beyond recall and the Button Box (and Farris, possibly) in the end caused the Jonestown massacre.

Now examine the character of a person who, despite being told her caretaking of the Button Box has rewards, is savvy enough to believe that there is a cost too and so she does not abuse the power she inherits.

Think of the temptation for a young person, who is being bullied and has high aspirations (that the 1891 Morgan silver dollars help with) to not use the compelling buttons that call to her.

She still makes mistakes and others, as well as herself, suffer for them; she is human and this realness permeates the reader.

Gwendy has such strong feelings of empathy, despite a dim world, and so she grows up and is a strong woman that can tackle anything.

All of the4se qualities help to shape the Gwendy we meet in the second book of the series.

Gwendy’s Magic Feather is a modern fairy tale fit for the Brothers Grimm updated to slice like a twentieth century switchblade!

So what does happen when an older Gwendy is returned the Button Box amidst far greater perils?

To start off the book, we meet an older Gwendy in Washington D.C.

Gwendy’s sharp intuition and skill makes her a successful writer and then, in a sudden fit of obligation to her country and her home state of Maine – and the encouragement of others begging her to run – she miraculously unseats a deplorable Congressman in her district.

The world created in the Gwendy-verse feels too real at times, bringing its own amount of horror with that realness.

We can see the Washington meetings. We can smell the unknown plots lurking in some of the politicians’ shadows.

Congresswoman Gwendy Peterson is a beacon of kindness and candor in Congress where these traits light up amidst the ever-growing shadowy spaces besieging Washington.

The extraordinary journey that began as a “palaver” with a mysterious man named Richard Farris in a sharp suit and felt hat at the top of Castle Rock’s Suicide Stairs 25 years earlier has become a memory, floating but distant.

The once kind and witty Gwendy of age 12 – the first time she held the Button Box – is still a kind and witty person, because that is her charm, even as she is beset by dangers to her home town, the Capitol, the world, and her family.

And so, for the first time in 15 years, the Button Box reappears to Gwendy . . . sans Farris.

The vivid memories come back strongly and a thought torments Gwendy: what role has the Button Box played in the outcomes of her life, of her successes and failures? Were they just paths she carved on her own?

Much of this is a “who knows?” inner monologue that goes on throughout the book.

We feel for Gwendy as guilt clouds her mind and her strong demureness is rattled by the uncertainty of what she has done in her life – did she act because she wanted to or what things did she do that may have just as a result of holding the talisman, the Button Box.

She does not lose her sense of self, even as she doubts her past, present, and future deeds, which is admirable.

But you feel for her self-doubt that is ever-torturing until the very end of the book.

Where is the man who said she would never see the Button Box again? Where was the bearer of the blessing and/or curse? Where was Richard Farris?

All the while, Gwendy’s husband is away across the world in a dangerous city bordering on implosion; that stress looms large.

What can the Button Box do to help?

Gwendy’s mother collapses with a certain terminal diagnosis of cancer.

What can the Button Box do?

Two girls have just gone missing in Castle Rock, and Gwendy arrives on the scene.

What can the Button Box do?

The Button Box is its own character that crashes on the story and never lets up.

Gwendy’s mother was recently seen as cancer-free, and her parents brought out a long-lost treasure: Gwendy’s magic feather.

Once conned as a little girl, with all of the money she had saved for months to buy a “magic feather” from a young boy preying on tourists. The feather did not appear to have any magical properties once it was attained.

Then her mom collapses.

Dying in the hospital, Gwendy slips her mom chocolates from the Button Box.

There is a miraculous recovery the next day, but her mom also has the magic feather in her hand.

It must have been the feather her parents think.

Amidst the search in the town, Gwendy acts and thinks more like one of the sheriffs than she does a Congresswoman and she dislikes the mark of any celebrity labels.

Before the Button Box had with the pull of a lever delivered delicious chocolates that improved all of the senses and gifted, for a time some of the things the holder of the Box desired; for Gwendy, she initially wanted to lose weight and as she got older she kept the box dispatching mint condition 1891 Morgan silver dollars so she could afford to go to an Ivy League college.

But the Button Box has a price behind each gift, and the lure of the buttons grows stronger and overriding with each use.

Still, when Gwendy gets a kind of shine to her and she can read into the memories of someone she touches, the psychopath behind the missing girls is spotted, as is a crushed felt hat amidst the darkness in the Maine snow.

Castle Rock is an infamous place in Stephen King’s works, and Richard even inserts a statue where a great fire once ran rampant in the infamous town.

But this is also the Gwendy-verse, and Chizmar expands it brilliantly.

Only in the end does Richard Farris come back to claim the Button Box again.

But he does finally assure Gwendy that she is special, a caretaker, but she has also made her life’s accomplishments on her own.

The possibly evil giver of power, in Farris, seems to have a soul in there. 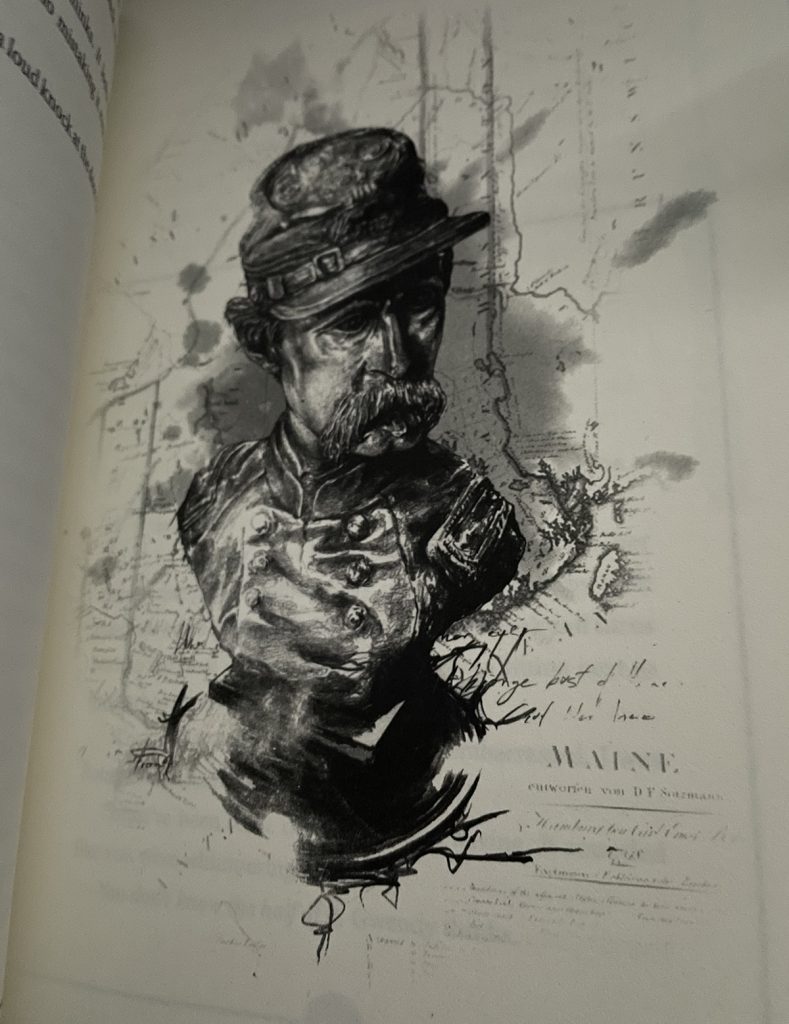 If you look at this book as a casual, fun page-turner you will like it, but there is so much more to Gwendy if you try to observe her.

Gwendy is like no character I know of and her stories are a great example of contemporary speculative fiction that delves its own niche far into the realms of fiction.

There are thousands of years of stories based around good and not-so-good people being given choices with consequences and rewards that weigh on the conscience, the humanity.

But this one has a flair, a moral, and a character like no other.

Richard Chizmar brilliantly grows Gwendy’s story arc. And come the end the reader is left wanting to follow along with her as her odyssey continues.

Both the small press publication of Gwendy’s Magic Feather by Cemetery Dance Publications and the signed-limited edition by SST Publications are sharp!

The Cemetery Dance edition has a beautiful texture to the boards with gold foil stamping and awesome cover art by Ben Baldwin and interior art by Vincent Sammy. 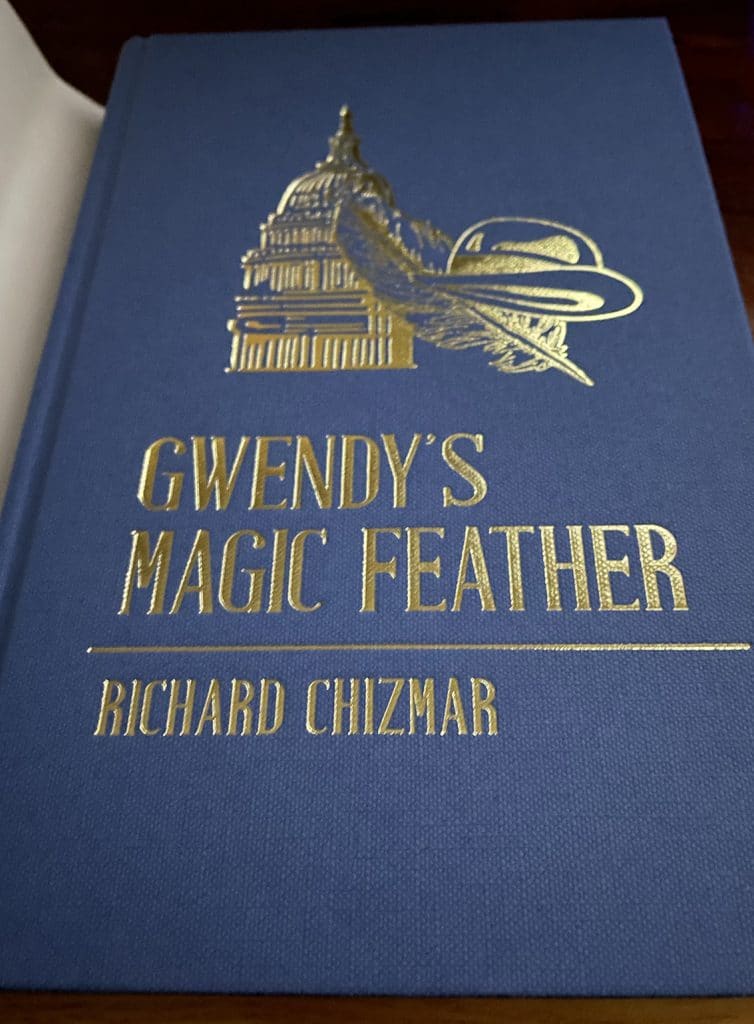 The SST edition is illustrated, oversized, is signed by Richard Chizmar and all contributors, including the wraparound cover and interior artist Vincent Sammy, the author of the afterword Bev Vincent, and the Castle Rock mapmaker, artist Glenn Chadbourne; this is another stunner! 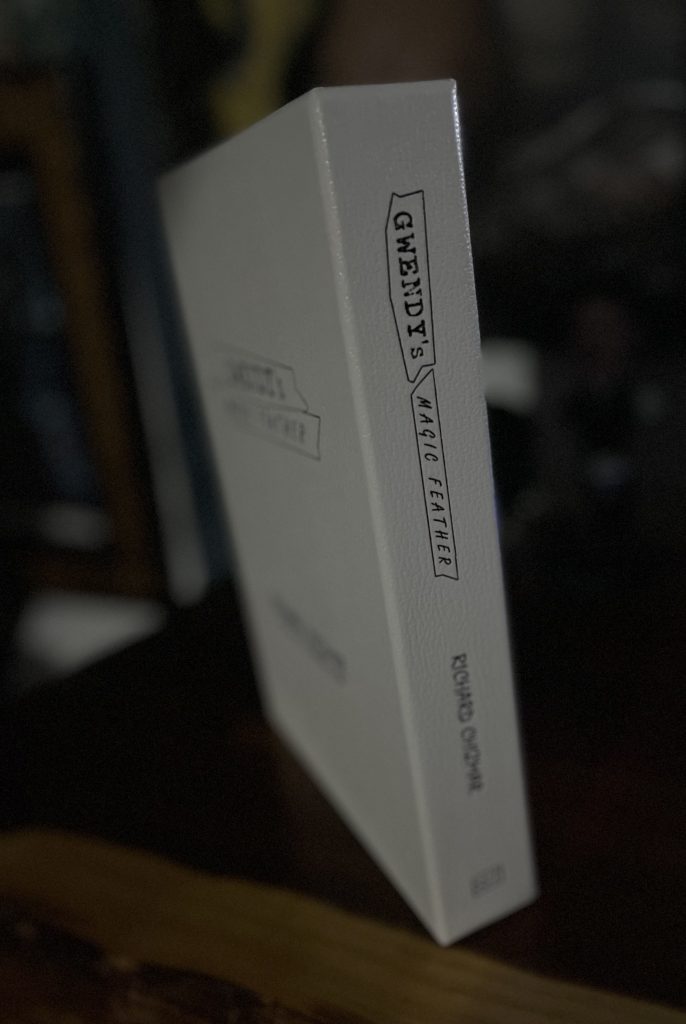 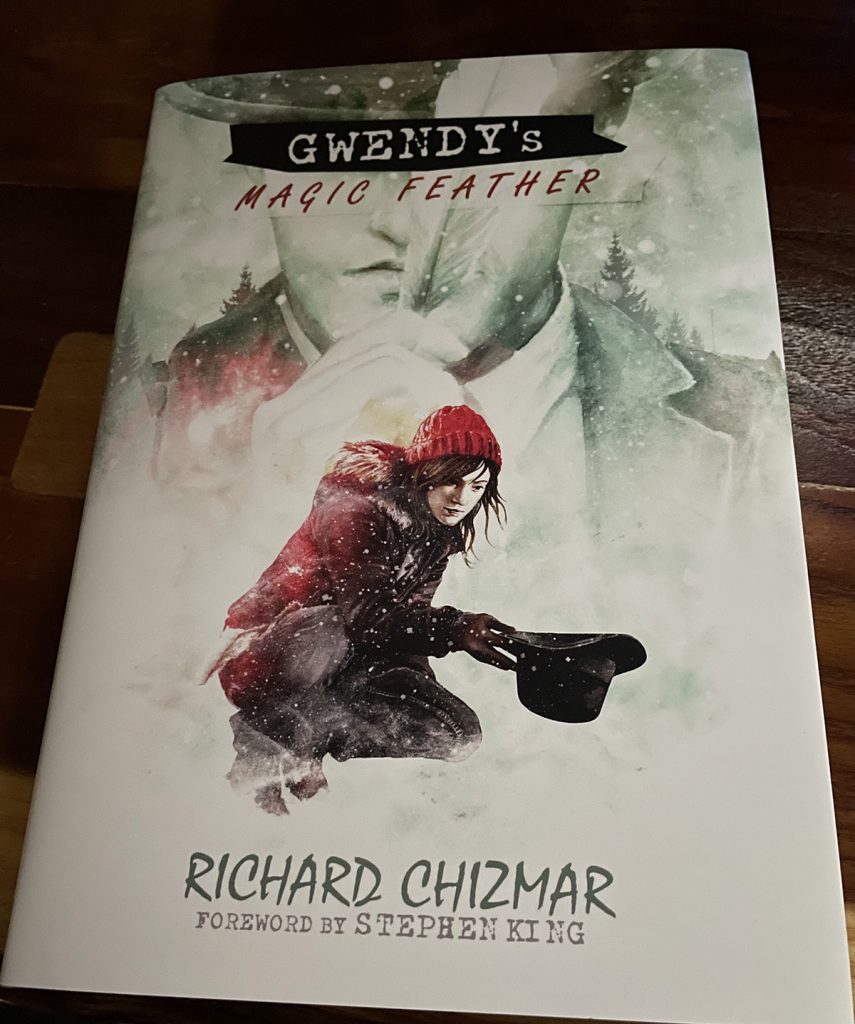 The quality of both editions, from the paper, to the boards, to the dust jackets make both of them worth having side by side. 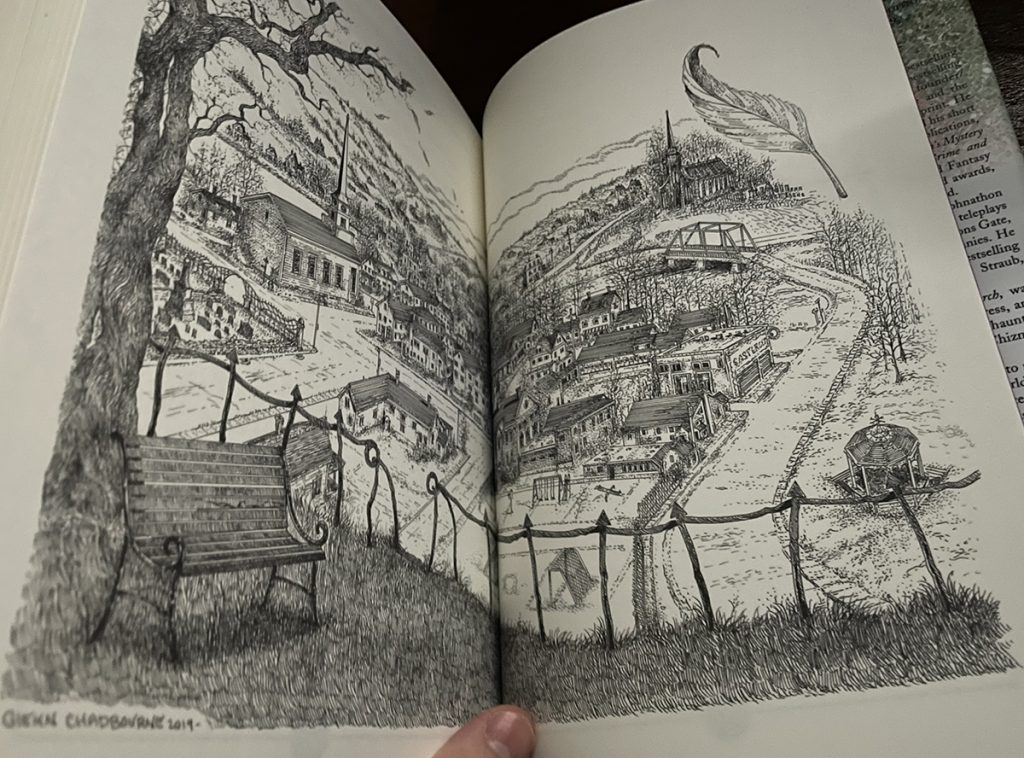 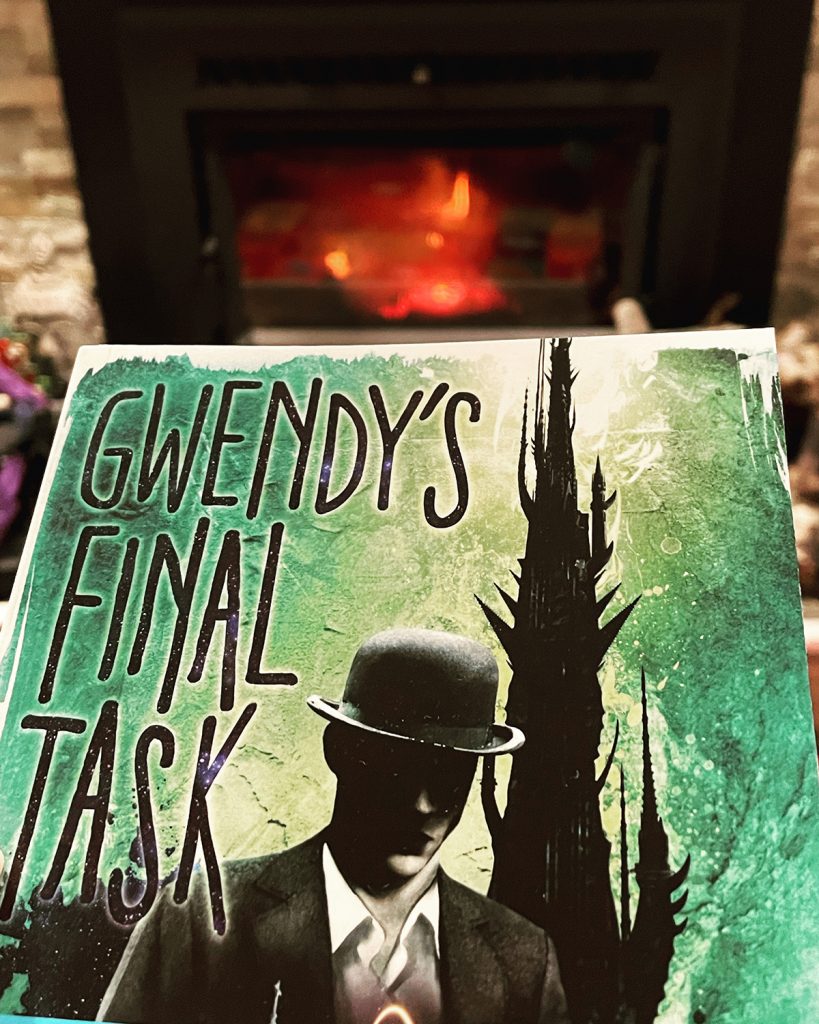 The next book Gwendy’s Final Task, possibly the comclusion to the Gwendy Series, is co-authored by Stephen King and Richard Chizmar, and comes out on February 15th, 2022. 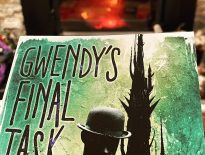 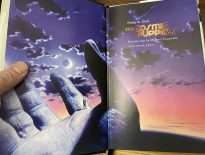