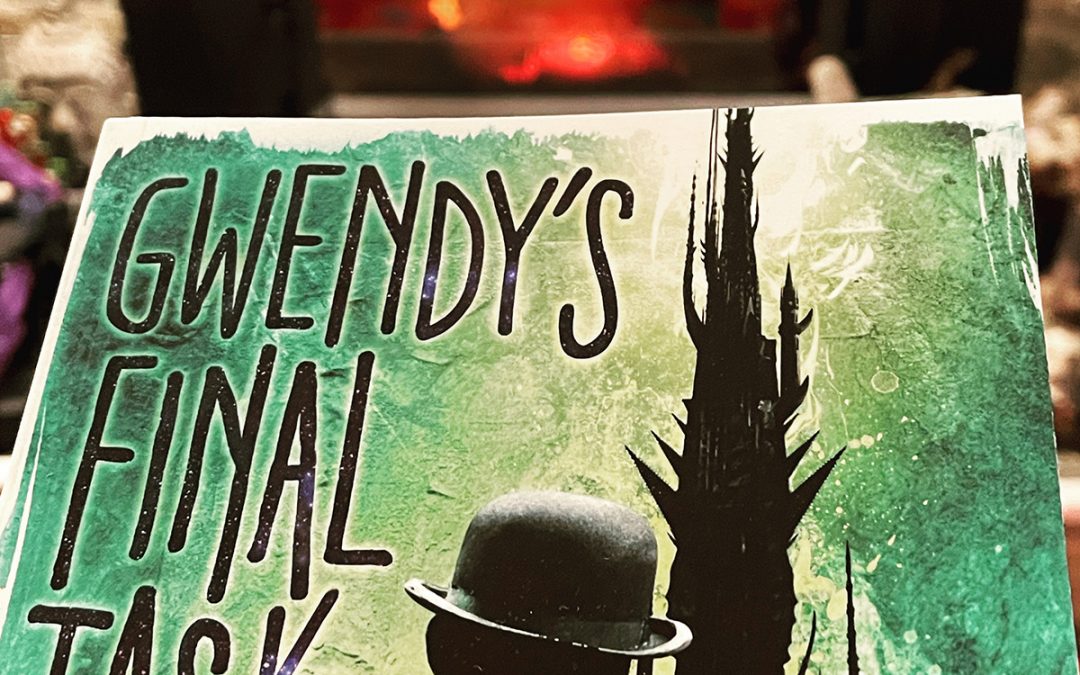 Spectacular and moving … there’s just no one like Gwendy. This is a SPOILER-FREE** Preview Book Review of Gwendy’s Final Task by Stephen King and Richard Chizmar. We may re-examine this book at TFF in more detail, with SPOILERS, in a couple months’ time – it is that good of a read! But you may want to read the first two books in the Gwendy Series before tackling this book.

There are three major players in this book: Gwendy, those forces opposed to her, and the button box itself.

The button box is a keystone for power: good and evil can be performed by it, in large doses or small.

Gwendy is a good person, at heart, and so she understands this and has been one of its better caretakers, it seems, but that does not make the choice of using or not using the button box any easier.

Still the gravity of this escapes her, because the thought that extremely powerful entities will stop at nothing to claim the button box does not cross her mind until that is told to her flat out.

The story passes through Castle Rock and another infamous town – and still horrifying – from Stephen King’s works, on and up to the space station.

When we last saw Gwendy, in Gwendy’s Magic Feather, she was 37, a Congresswoman, and had been sent the button box for the second time, as crises developed all around her.

She was only supposed to have the button box one time, at least that is what Farris said in Gwendy’s Button Box. 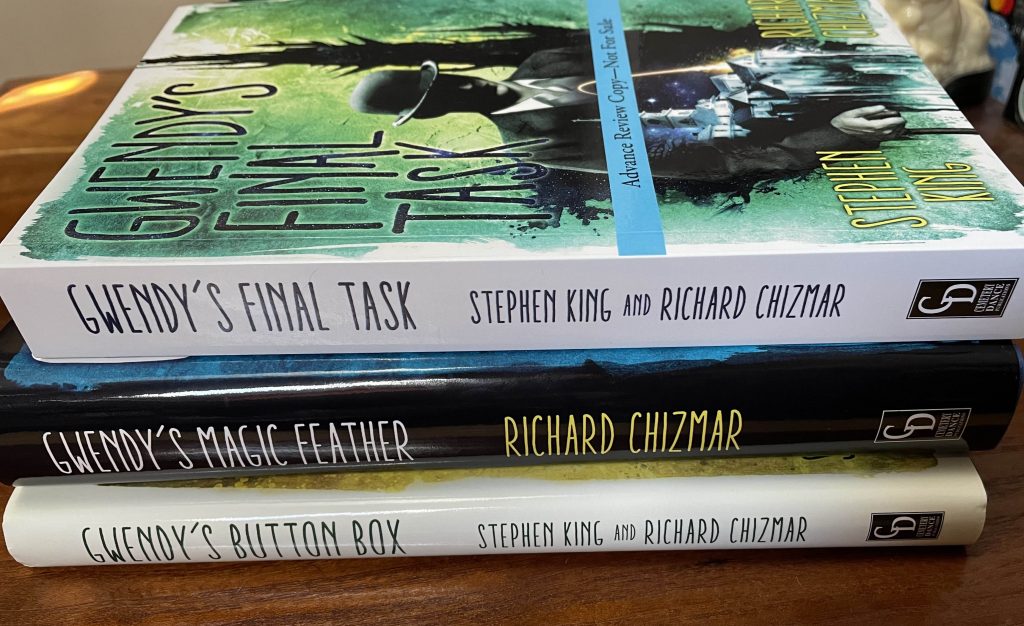 Now Senator Gwendy Peterson is older again and her third time with the button box will take her from Castle Rock and planet earth up into to outer space.

This is both remarkable in the achieving and very necessary for the plot.

The world building by King and Chizmar is paramount to this modern fairy tale enveloping the reader.

The very experience of anticipating the takeoff and having the tablets and instructions needed to manage one’s own controls from their seat draws the reader in.

The responses of the crew (and its computer), the dialogue and banter, from serious-to-jovial, and the setting all pave the way to a ratcheting thriller taking place in the near future and, at times, in zero gravity.

Gwendy is one of the “celebrity” guests on the way to the space station.

And as the story goes back and forth from Gwendy’s brilliant but troubled mind out in space to her memories and the happenings on earth, you cannot help but feel the anxiety that Gwendy feels, again and again.

She has a mission. And it only gets more difficult by the day, the hour, the minute.

The circumstances are dire, and Gwendy’s grip leaves dents in your heart.

The Richard Farris we have all come to know, he is on the cover, and I will confirm he is back, and I will say he has a significant part to play, as he did in the first two books in the Gwendy Series.

We learn a great deal more of Farris and of Gwendy too, and of what the button box can do. These three entities have all been revealed more and more throughout the trilogy when things are at their worst.

So the suspense meter is high, the horrors of earth and space run rampant, and the ending to Gwendy’s Final Task will leave you floored.

This ending moves the reader in a truly profound way. 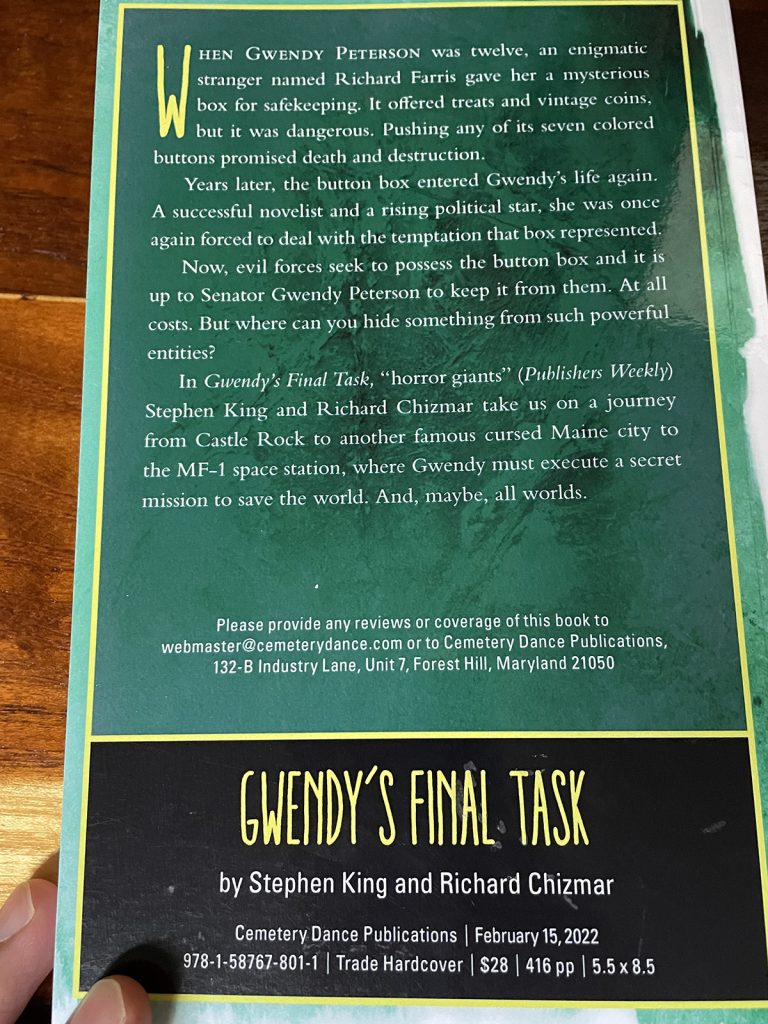 The Dark Tower Series – Stephen King’s magnum opus that begins with The Gunslinger – looms largely on all of the covers of every edition of Gwendy’s Final Task, so you assumed right: there is a connection.

And it is definitively one of the more closely tied books to the Dark Tower amongst the bevy of Stephen King’s works.

I will just say this to the authors: thank you.

A last word on Gwendy and collaborative character building:

I can think of only two characters, each born of two authors pairing up to create a character’s brains, courage, and soul that makes for some of the strongest and compelling people in the world of fiction.

And Gwendy shines so brightly!